I’m thrilled to share another yummy recipe from my lovely sister-in-law, Melissa the Domestic Duck. Take a look at her tasty veggie quinoa bites recipe!

My son is a picky eater. I said it. Nutritionist mom bloggers be damned. I know I’m not supposed to say it because it has become an admission of failure as a mother. Obviously, I have a picky eater because I feed him exclusively chicken nuggets and macaroni and cheese and then act surprised when he doesn’t like green beans.

I’m a pretty great mom (toot toot). My son is almost 1, he started baby led weaning at about 6 months. I present him with the family dinner each night, even when it includes green beans, because you never know when he’ll change his mind. His dad and sister share his distaste for green beans, so I’m not optimistic.

All of that to say two things: first, if you have a kid who only likes raspberries and pita bread, you’re not a failure! Or at least you’re not alone. And second, those nights of refusal have led me to my best friend: the mini-muffin pan. I have at least three flavors of mini-muffins in my freezer at any given time just in case I get the pitcher’s arm of rejection.

These Veggie Quinoa Bites are one of the favorites. I feel good knowing my son is getting all the protein and green veggies he needs to grow, and he gets a full tummy without having to wait too long. I make one big batch and freeze them in packs of 4. They reheat quickly and can be easily modified to your picky eater’s taste. I hope your little one likes them as much as mine! 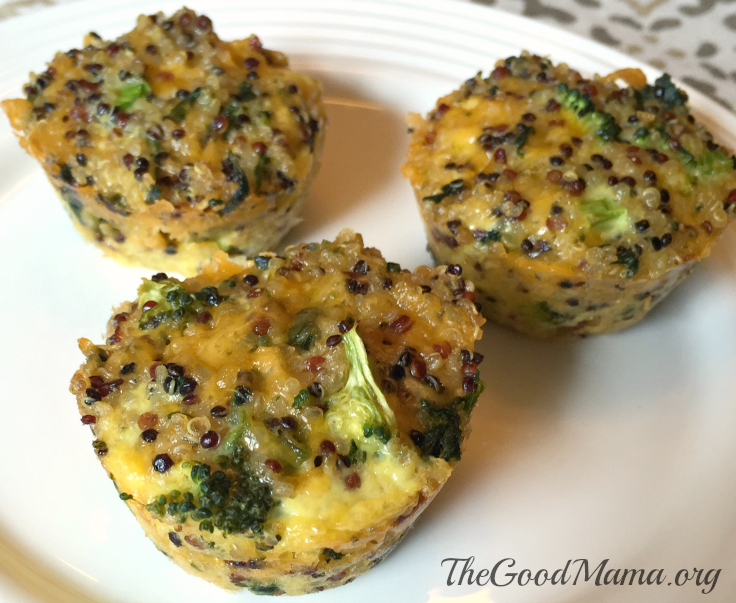 Melissa is a stay-at-home mom who can’t knit enough for her adorable 17 month old daughter and hubby, Timmy. She loves spending time in the kitchen, especially baking. Once in a while she'll take a break from baking and knitting to work on some other craft projects. She likes to share all of her projects and stories from her domestic life.

W is almost 15 months old and absolutely loves reading stories with me. He’ll pick up a copy of I Love You Forever, waddle over to…